I can’t believe this is my first blog entry of 2014. I apologise profusely for my absence. But I bring good tidings and lots of lovely photographs!

So I’ve been trying to write this post for over a week. Apparently when I don’t think anyone will read my blog I can ramble and write for ages but the minute I think people will actually read this thing my brain insists that I’m going to be judged harshly and freezes up. I’m trying to get past this so let’s get this thing written!

A few weeks ago I was contacted by the lovely people at The Royal Collection trust asking if I’d like to attend an exhibition press view for my blog. Obviously I said yes. The exhibition is called In Fine Style: The Art of Tudor and Stuart Fashion and as you might expect features paintings, clothing and accessories depicting fashion during the 16th and 17th centuries and how they impacted social standing, religion and family life.

Having never been to a press view before I had pretty much no idea what to expect and was pretty terrified of turning up and looking foolish in front of a large collection of people, mostly professional journalists 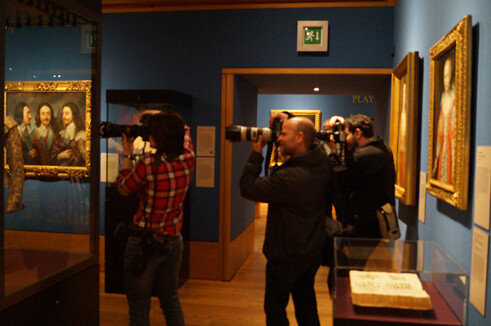 A “capture” of photographers*

As it turned out, they were all pretty much too busy being professional and doing their jobs to actually notice me so I was free to wander and photograph to my heart’s content. (Although I was very careful about not getting in their shots and hiding from the camera crew from STV doing an interview with one of the curators)

Although we studied 17th century at college I’ve always been more interested in 19th century clothing and society so don’t really have any extended knowledge of the period, it was really interesting to see an exhibition focusing on how much of an impact clothing and costume had during that period. These kinds of exhibitions are lacking as a whole I think. Although clothing is taken as a small part when discussing historical periods most exhibitions don’t focus on clothing as being such an integral part of society and standing.

Although the number of existing pieces on display was small – understandable after almost 400 years; the pieces that were there are perfect examples of how much work went into clothing and how time consuming it was for the dressmakers (or wives or servants) of the time.  And you’ll know if you’ve ever read my North & South post, if there is one thing about historical costume I LOVE it’s the time consuming details 😀

Like this gorgeous men’s doublet from around 1625-30 and thought to have once been owned by Charles I : 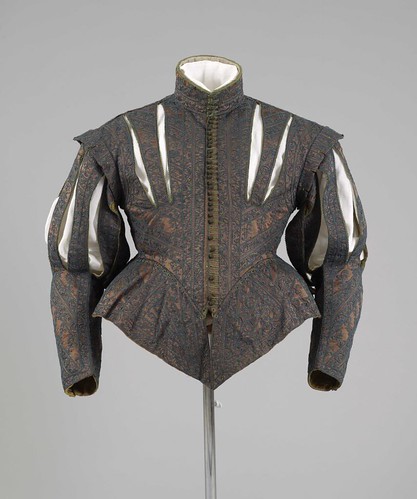 Because of permissions regarding loans etc. I wasn’t able to get a really close up photograph of the embroidery details of this but it is absolutely stunning. And with a little jiggery pokery in photoshop I was able to zoom in the official photograph I was given so you can actually see the amazing stitching. 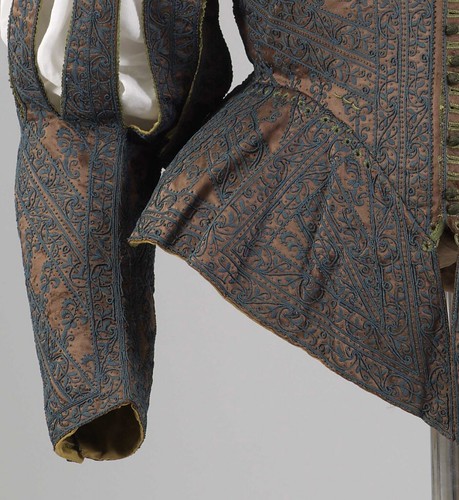 It has a gorgeous brown base fabric with incredibly detailed blue stitching detail, hand bound button holes (obviously, since the sewing machine wasn’t around for another maybe 200 years) and fully lined in a corresponding fabric.

Also on display were some absolutely gorgeous pieces along with a couple of wonderful illustrations of the changing silhouettes throughout the period. Another piece I wasn’t allowed candid photographs of was this wonderful bodice (known in the period as a waistcoat) 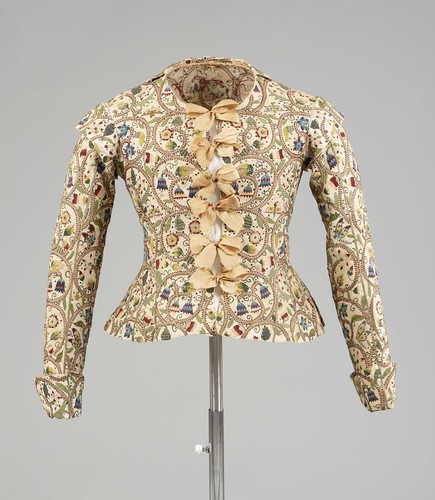 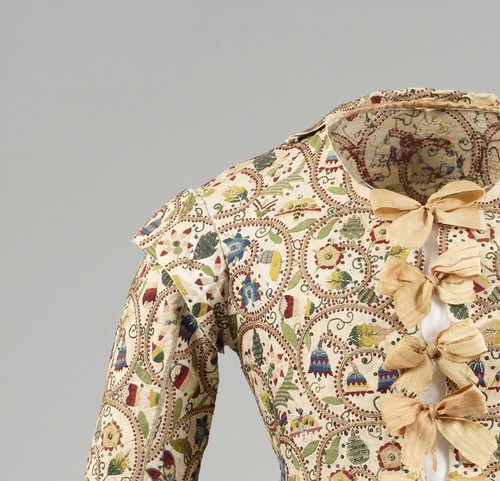 And you really don’t get much more time consuming or detailed than this amazing handmade lace collar or “cloak band” from around 1635 which uses a mix of needle and bobbin lace. (Again once thought to be worn by Charles I) 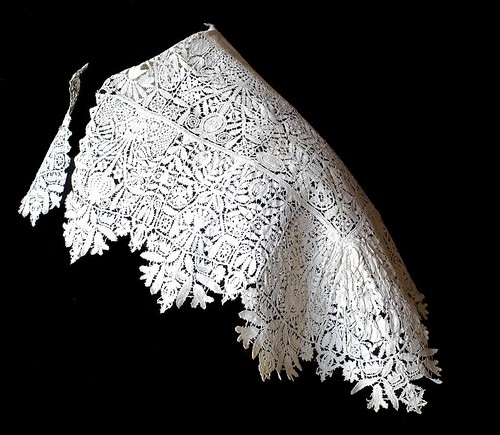 I always think that this type of collar and this kind of silhouette typifies men’s fashions during the 17th century.

The same type of lace collar can been seen in this painting by Anthony Van Dyck (who also kind of typifies this period in terms of his work, style and influence) of Charles I around 1635/36 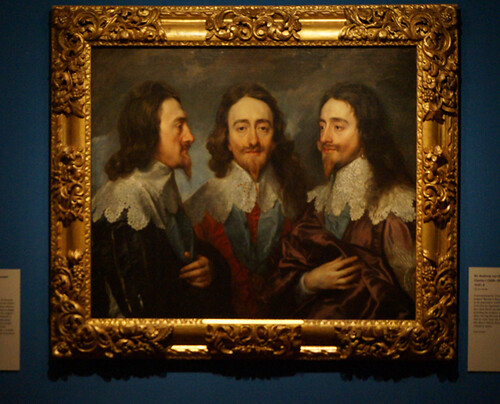 The only downside, which wasn’t the fault of the collection or the staging of the exhibition, was the lack of examples of the clothing and accessories worn by the lower classes. This will be for many reasons, the fact that in lower classes – especially the working class – clothes were worn, repaired and passed down until they were literally unusable as anything other than rag so it’s unsurprising there are very, very few existing examples of the clothing of that period.

Another reason is cost. There are certain pieces in the exhibition where the clothes made for the portrait actually cost more than the painting itself, and even that would be expensive. The lower classes simply couldn’t afford to have portraits produced for their enjoyment. 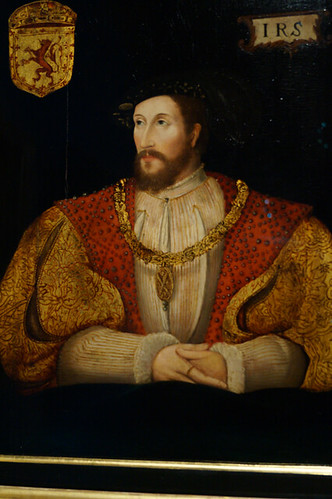 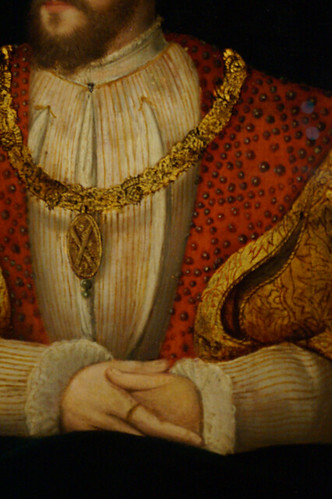 Like this piece of James V around 1540. The sleeves of outfit are made from fabric woven from gold thread while the collar is encrusted with pearls. Apparently, “His wardrobe inventory of 1539 describes a gown with a hood and collar ‘stitched with 49,500 pearls’” Just slightly out of the price range of your average farm worker or servant. :S

During the 17th century it also wasn’t very common for famous painters to focus their work on representing the lower classes. Many artists of the time were supported by rich benefactors who had no interest in seeing artistic representations of workers and peasants.

Apparently my website doesn’t like crazy long blog posts so I’m going to have to do this in a few parts!