The Weight of a Thousand Feathers – at times it was hard to breathe. 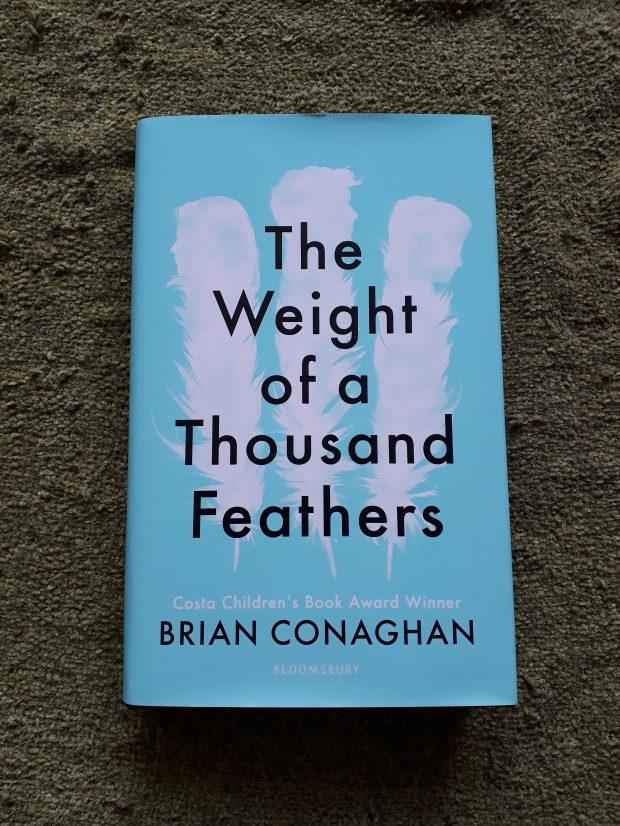 5 stars (I’d give it more if the Goodreads system allowed more) **This review contains spoilers! **

As those of you who’ve read my round up of the book festival would know I got to see and hear Brian Conaghan speak again this year. I also got a chance to talk to him while getting his new book The M Word signed.

This ended up being my last event of the day as I was succumbing to exhaustion and had already cancelled the following event with my friend. I mentioned seeing him last year and having still not felt up to reading this book, as I was still struggling at this point. He then did the sweetest thing by giving me his email address and told me to read the book and then let him know what I thought. Honestly by that point I was so tired and in such pain I felt close to tears anyway but that gesture had me a bit tearful and star struck on the drive home.

So I read the book and here it is – my thoughts on it and how it felt to read another book with a main character dealing with MS.

I thought after Love from A to Z I would be better prepared for reading this but I hadn’t counted on still struggling with recovery by this point.

As much as disability rep and own voices* are important, as a reader it can be so hard. I didn’t feel the need for trigger warnings or anything. I mean, what trauma would it trigger? Especially since I was still struggling with the “trauma” of diagnosis** It’s just hard to read certain things when other parts of your life are crumbling.

It won’t come as a surprise to anyone that I was absolutely sobbing through large chunks of the book especially when it came to flashbacks about how Bobby’s mum became ill; the starting symptoms of the MS – some of which were so reminiscent of the starting symptoms I was faced with a few years ago.

When I was discussing the ending with someone they asked why Bobby’s mum had to die. It seemed to adhere to the ableist myth of better to be dead then disabled.

But the more I thought about the more I really understood the ending. It was never about his mum being better dead than disabled – it was about choices. It was about her right to choose how and when to end her life. Her death was inevitable due to the progression of her MS so this was about her decision, and about Bobby’s decision to be there for her. Bobby, Danny and their mum got to be together, got to choose. As Danny himself said, when they were discussing the possibility of their mum going into hospital or hospice care:

“But Mum shouldn’t be in a hospital with tubes and strangers – she should be with us. We can’t put her with strangers.”

I loved Bobby. He could’ve been a stereotype, of a 17 year old boy; of a young carer, but he was so much more than both of those ideas. He was complicated and layered and wonderful. I think my favourite thing about him is that he’s a writer. I identified so much with his need and effort to explore his feelings and situation through poetry. (Having myself written some fairly bad poetry as a teen dealing with bullying)

It gave a layer you wouldn’t expect and subverts the idea that boys don’t like books or reading or even creativity.

I loved the other characters too – Belle, for being so unfailingly supportive and positive. Danny for being so insightful – he was underestimated by almost everyone, even Bobby at times – but he just seemed to understand what was going on with his mum more than everyone knew. I also loved Roddy and the rest of the Poztive guys. Honestly I disliked Lou from the start – was I supposed to like him? I’m not sure. I did have a feeling that there was something else going on with him but I had assumed he was pretending to be a young carer so it was an interesting turn that he had been through it all; that he’d been faced with the same dilemma as Bobby.

I especially loved Bobby’s reaction to Lou’s complete detachment to and attempt to “help” Bobby’s mum. As Bobby said, it wasn’t his job; he didn’t have the right to do anything regardless of whether he had been through the same battle with his mum. Although you could argue that the reason he had such a detachment to it, and didn’t really understand Bobby’s reaction was that it hadn’t been his mum’s choice, her request – it had all been for him.

I also really liked how Bobby’s sexuality was dealt with. It wasn’t simply announced at the introduction of Bobby: 17 years old, male, a young carer and gay. Instead, it was introduced slowly, when it made sense, when it mattered. I liked too, that Bobby was facing relationship and romantic issues – just like most other teenagers – at the same time as dealing with issues with his mum. It was never one or the other so in this way he was built into such an interesting multi-dimensional character.

Hilariously (or maybe just darkly funny – I have a hard time deciding which) I realised a few days ago that the bookmark I’d been using while reading this book was one I had received along with a book called Overcoming MS (which has since been relegated to the recycling bin as, call me strange but I have a thing against burning books, even awful, unhelpful and frankly dangerous ones.)

Ultimately though, I was really glad I finally did read this book, it was really difficult but I do think it’s important to read difficult and hard books sometimes (obviously as long as they don’t damage your mental health).

So now I’ve added The M Word to be tbr list and I’m off to figure out how to email a famous author to talk to him about his book. (Cue a bit of panic and flailing.)

*Although to be clear, neither Love from A to Z or The Weight of a Thousand Feathers is really own voices since neither S.K. Ali nor Brian Conaghan have MS themselves, although both books were written after extensive research and both have family experience of it.

**I have had a lot of discussions recently about the idea of triggering and trigger warnings with my mum who is a practicing Art Psychotherapist. I won’t go into it all today but let’s just say I have mixed feelings about the current conversations around the use of words like triggering and trauma.