Good evening, kind people!
I’ve been racking my brains all weekend to think of what to do for this week’s Good Mood Monday post and the result is that it’s now 9pm and I’m still drawing a blank!

The as I wrote this I came across an idea, I can share my baking adventures with you guys!

I like to have fun in the kitchen and have over the past year or so been trying out all sorts of new recipes I call these my baking adventures and while I always share them on Facebook I figured today I could do a big master post of all of them for you lovely people! So here goes:

First, way back in 2013 I decided to try something from the wonderful Roald Dahl’s Revolting Recipes for, you guessed it Roald Dahl Day on the 13th September. I went for the richest thing in the book of course which was Bruce Bogtrotter’s Chocolate Cake from Matilda. 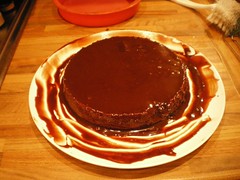 Then we jump forward in time to May 2015 (ok I had a lot going on in those 2 years and kind of forgot to document any of my adventures) where I started trying Russian Food. First up was a спартак торт or Spartak Cake. I made chocolate version obviously.

Following the Russian theme I then attempted черный хлеб or Black Bread a ridiculous dense Rye bread often eaten with sour cream and caviar the recipe for which asked for a grand total of 18 different ingredients!

Inspired by my success with Russian food so far I then attempted some Blinis to serve with cream cheese and smoked salmon. These were so very yummy. 🙂

I then decided to move country and headed to France for some sweet treats. First I tried some chocolate (well duh) choux buns – my very first attempt at making choux pastry. These turned out very yummy although I think I undercooked the pastry just a tiny bit, but it still tasted awesome once filled with cream!

Next on my French list was what I believe to be my Baking Nemesis: French Macaroons. I have attempted these so many times and only once managed to get them to work and even then I made them ridiculously tiny by accident! Although to be fair they ended up tasting good any way 🙂

After filling myself full of sweet French treats I jumped back to Russia to try some savoury soups first Yxa or Fresh-Soup, a type of lovely fish broth.

Next up was the traditional борщ or Borscht but with the added twist of lovely tender chunks of beef steak.

In July of 2015 I spent a few weeks house-sitting for my parents, so I used the weeks alone as another excuse for baking attempts. In a quite messy silly adventure I made homemade pop tarts with Nutella and chocolate glace icing

Jump forward a few months after a fun visit down to Blists Hill and a very tiring house move I then tried some сливы вареники or plum vareniki this time a Ukrainian sweet dumpling. After the success of this one I also tried some cherry vareniki.

I then tried savoury again with a simple Ukrainian dish of Cod in Tomato Sauce. I served it with brown rice and it was very yummy!

Christmas brought a fun Victorian Inspired menu with a traditional Raised Game Pie for dinner and Nesselrode Pudding for dessert (which is a frozen custard dessert made with chestnuts, cherries and other dried fruits)

For Mother’s Day this year I decided to go for another historical and traditional idea which was Simnel Cake. Simnal cake is a really easy cake to make and was often prepared and gifted on Mothering Sunday by daughters who often spent months away from home working as domestic servants.

Finally we come to this weekend. My aunt is over from the US right now and both her and my other aunt came over on Sunday so I decided to make some simple fruit scones for us to munch on. BUT I ended up waking up at about half 4 in the morning and couldn’t get back to sleep so I got up around 5am and by half 6 I’d washed two piles of dishes, put on a load of washing and drying and Also made a full Victoria Sponge and rich fruit scones, whipped some cream and pulled out all the stuff we’d need for a proper afternoon tea! (I even used the jam dish once owned by my great aunt – which kind of looks like an orange and can be seen in the right side of the photo)

And now we’re here and I need to decide what my next baking adventure will be. If you have any ideas just get in touch! 😀