So every week I promise myself that I’ll do a morning good mood post but then every week something get in the way! But here I am regardless, another Monday another post!

I’ve been busy tidying up my studio after finishing off my orders this week. Including finally finishing the Victorian Steampunk Groom’s outfit that will be on its way to France this week

This week’s post is brought to you by my DVD collection. About a year ago I sold a lot of my DVDs in part because I had plans of upgrading to Blu-rays but to be honest a year later I still haven’t replaced them and I end up just missing the films instead.

So, the last few weeks I have set about replacing my collection, buying the films as I find them in CEX or charity shops (dammit I love charity shops!) so now I have now added to my collection a good handful of Johnny Depp/Tim Burton films, namely Sleepy Hollow, The Corpse Bride and Edward Scissorhands (3 of my favourite Burton films) a few romantic comedies/dramas – Sliding Doors and Reality Bites. More fantasy (obviously) in the form of Stardust and the special edition Director’s Cut of Hellboy. Plus despite having the special edition of Series 1 of Doctor Who I’ve had to replace one of the discs because it was damaged, hence the random Doctor Who disc 🙂

Finally, a crowning achievement in my collection was finding the Back To The Future Trilogy on Blu-ray for under £10!

Hopefully in the next few months I will have not only replaced all my missing DVD but gained a few extras too! 🙂 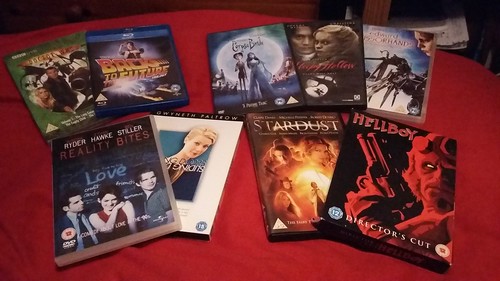 In other news, I finished my short story submission for stage 2 of my MA application (paranormal romance obviously) AND managed to edit it down below the word limit – a first for me really despite the 3 years at university I’ve never managed it before. The deadline is Wednesday and I may have been putting off submitting it; I think I’m a bit scared – what if I don’t get onto the next stage? What if they think it’s awful or worse what if I DO get invited to an interview?! That would be even scarier! 😀

So this Monday has been good thanks to an increase in filmic wonders and finally getting my orders finished. Hopefully I’ll have another project post or exhibition post ready for you guys soon but until then,