So there isn’t really a point to this post apart from the fact I finished watching The Fades this morning and wanted to have a bit of a flail about how epic it was.

I know, I know you’re all sitting there thinking “But Rhona, The Fades were on months ago” and you’d be right unfortunately I only managed to see the first 4 episodes of the 6 part series before disappearing off to Canada, meaning I had to wait all this time before managing to get a copy to finish watching the show.

And the only words I am able to form are Oh Holy God. (Ok I had a few more choice words than that but this is supposed to be a family friendly blog)

I love this show for many reasons:

First, the fact it’s this tiny little show hidden away on BBC Three where barely anyone noticed it. This is one of the reasons I am so fond of the BBC, yes they release garbage like Strictly Come Dancing or Top Gear BUT every once in a while they come out with little gems of almost independent works like this. It makes me appreciate the value of the licence fee, in providing original programming without too much commercial interference or agenda.

Second, is Daniel Kaluuya. Not only was he really cool on Skins (and a staff writer….how epic is that) in this he plays the ultimate geek/narrator. When he plans to save the world (or at least his chances of hooking up at a school dance and later his best friend) his first response is to use the lessons he’s learned from Star Wars. I only wish I had a best friend like that at school, someone with that kind of wonderfully geeky knowledge.

And Finally, I actually love the costumes of this show. The details of each character’s clothing are highly telling of the type of person they are. Neil is about loneliness and self-reliance, while Paul is the geeky little kid given too much to handle. 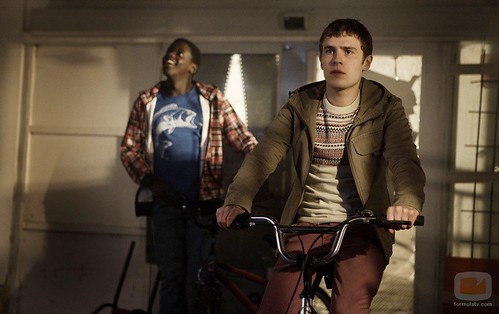 I noticed that as the final episode arrived and Paul grew braver but also more burdened his costumes became darker, and more subdued (ok to be fair he’s covered in blood in this one but my point still stands)

It’s this attention to detail which always made me want to become a costume designer. The old adage goes that if you are a writer, you need to know your characters inside and out, even if not every detail comes out on paper/screen but the same can be said for the costume designers. You need to have an in-depth knowledge of the characters to understand why this or that character would wear a particular thing at a particular time.

Also, as a side note I love Paul’s purple/red jeans.