So I started this post on the 25th March and am only now getting a chance to finish it. Oops.

I think setting this up as a monthly blog at first might allow me an actual fighting chance of regularly updating.

This weekend has been lovely. My wonderful friend from university came to see me, shockingly it’s been almost 2 years since I saw her last (our graduation in 2011) so we spent a lot of time catching up, reminiscing and most importantly fangirling. As the boy announced late Saturday night we are very loud together. And we are. I loved being able to completely relax and fangirl and squee and ramble about how much I love minute details such as Lizzie playing with Darcy’s tie in The Lizzie Bennet Diaries or the looks given by John Thornton to Margaret Hale in North & South.

Part of being a costume designer, and film and tv graduate means I’m always on the lookout for such details. Not only is it my passion but it’s also my training. I love rewatching films that I love and picking up on new details every time. I’m taking North and South as the example since it was one of the most recent films I watched (for the umpteenth time) while the first few times I watched this it was for Richard Armitage and this wonderful end scene but now when I watch it I keep seeing this: 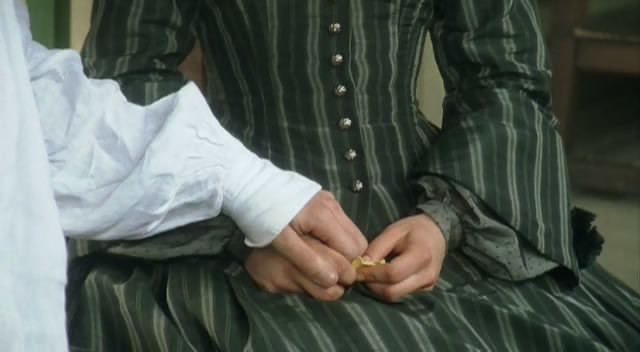 The inner sleeve of her gorgeous striped pagoda sleeve jacket (and matching skirt) is spotty. Grey chiffon with tiny black spots. A wonderful match to the grey and black stripes without being too monotone. It also shows the amount of thought, detail and research that has gone into these costumes. It would have been so easy to use plain white cotton or chiffon but this tiny little detail shows the talent and artistry of Mike O’Neill. 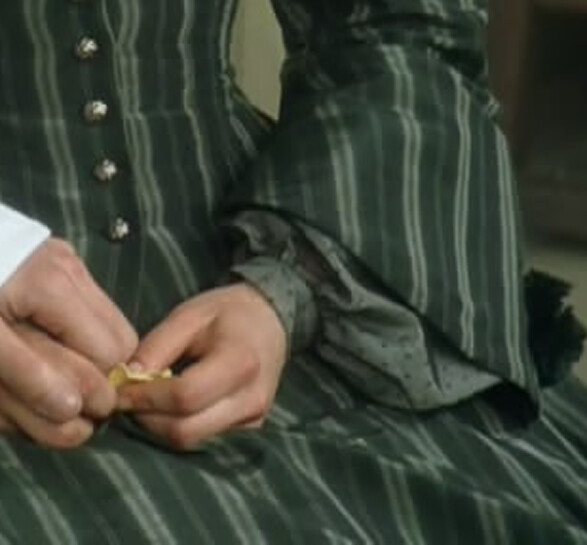 This series is also an extremely good example of how class changes clothing. While Mr Bell, the overall owner of Marlborough Mills (also Margaret’s and Fredrick’s god-father) is often flamboyant and expensive, this shows his higher position in society. This shows in his outfits both at Mrs Thornton’s dinner and his visits to Oxford and Helstane: 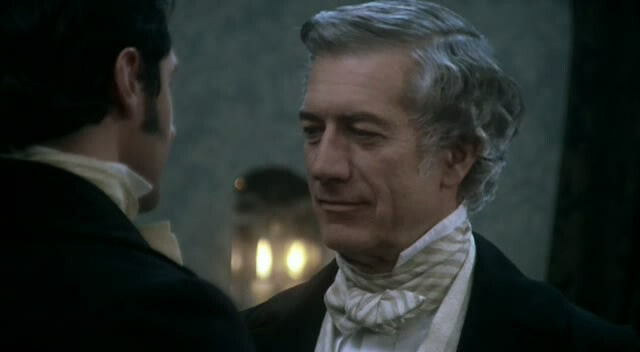 Notice the striped detail of his cravat compared to Thornton’s plain (yet still elegant) plain cream one. 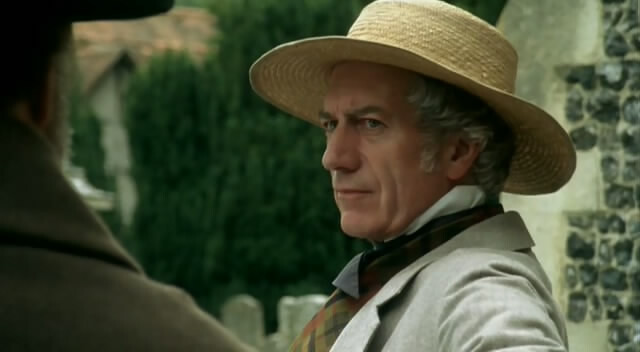 Or here in Oxford, compared to Mr Hale’s sombre black, Bell is cheerful in multi-coloured checks.
We again see these colourful checks when he visits Helstane with Margaret. 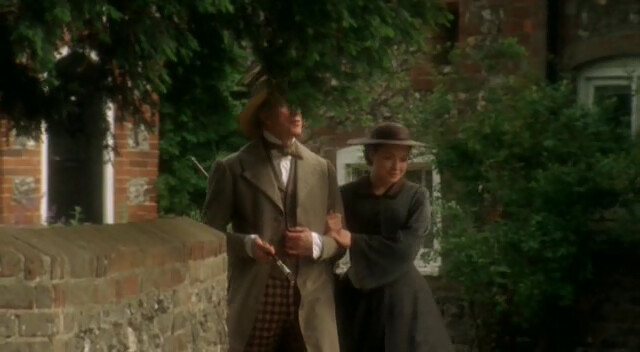 The Hales are, in slight contrast, much more sombre in their clothing, not just because of Mr Hale’s position as a clergyman. They are lower than Mr Bell in society, but still much wealthier than the Higgins’ or Bouchers which is noticeable.

Here, Margaret is giving some of her old and unused lace collars and dress details to Bessy, who helpfully points out “And what would I be doing with so so grand as that?” 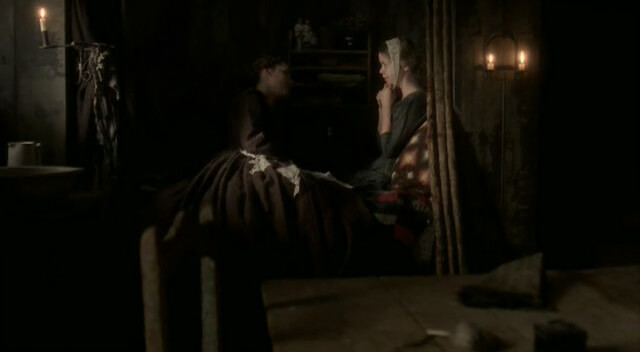 You can also see the Higgins’ place in society based on Nicholas’ clothing. He predominately wears a loose shirt with a waistcoat, clearly old and somewhat frayed. These clothes show wear and tear, they show a hard life, and they show that for this family, or for families in similar circumstances they make do with what they have. 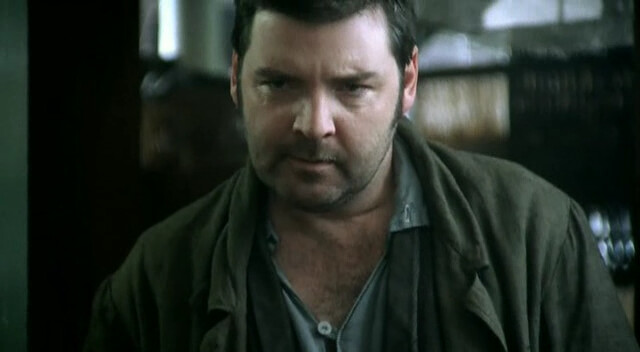 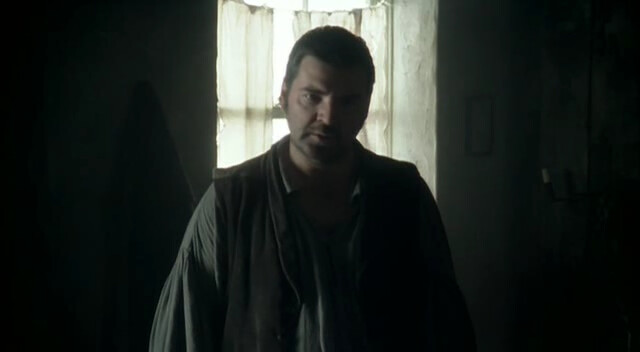 The Boucher children also feature as an example: 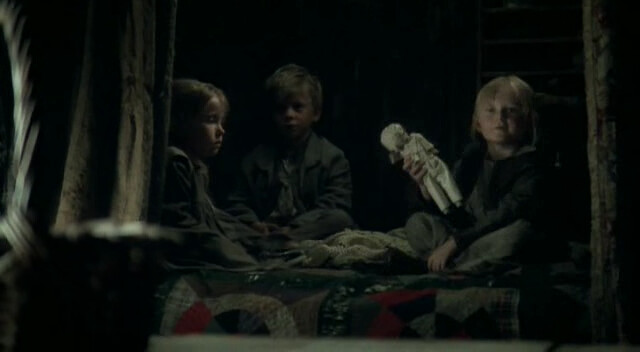 And last but not least is Mary Higgins. She is seen in roughly the same outfit throughout most of the piece. Her woollen shawl is used both during mourning and for warmth and comfort during the winter months. 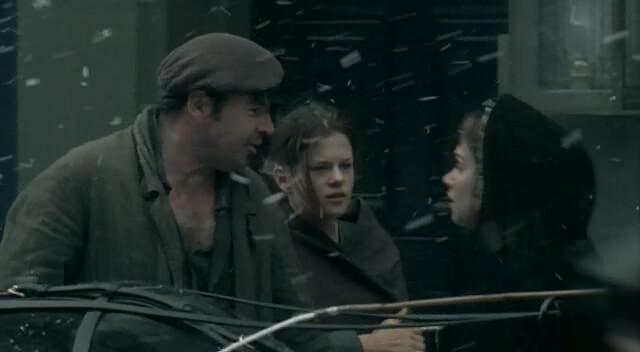 The details of the costumes range from the most obvious: Nicholas never wears a cravat, whereas the cravat is used as a bonding piece between Thornton and his mother during one point, to the extremely subtle – the stiffened starched perfection of Thornton’s shirts and jackets compared to Nicholas’ well-worn and dishevelled clothes.
This is one of the reasons I love this piece as it shows a really deep understanding by Sandy Welch and Mike O’Neill of both the nuances of Gaskell’s novel but also what clothes can show us in terms of class, wealth and pride. But it is also an excellent example of how costumes can be used to help successfully adapt novels to film and television.

Hopefully I can start updating this blog more regularly from now on, but until then….